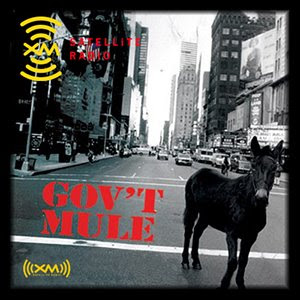 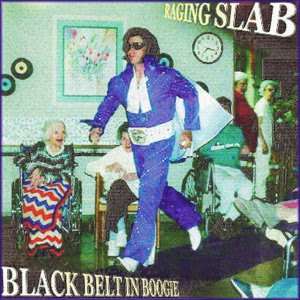 I previously posted 'From A Southern Space' and 'Freeburden'. 'Black Belt In Boogie' is the last unreleased album of Raging Slab.
What can I say about Raging Slab that hasn't been said already? They're one of the best kept secrets of Southern Rock. They're raunchy, they rock hard and they sure do boogie! Some of these songs wound up, re-recorded, on the 'Sing Monkey Sing' album. This album is a lot better, though...
If you need a sample of what the band is like, check out the video below. 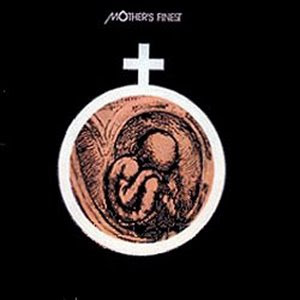 What do you mean, Mother's Finest isn't Southern Rock? Don't you own a copy of Martin Popoff's 'Southern Rock Review'? It's virtually the bible to Southern Rock... Or is it?
Well, I know. It's hardly Southern Rock, even though mr. Popoff did write kindly about MF in his book. They hail from Atlanta, Georgia: so they're Southern. But they play funk-rock. If you really strain yourself, you might hear some Southern Rock in it. But this is one of my all time favorite bands. And this record has been on my wishlist like forever. I still don't own a copy. This is not my rip, but it's a very good rip. Mother's Finest distanced themselves from this record. I guess that must have had something to do with the record company, cause this is as good as it gets. The first three songs are a bit feeble, especially production-wise. But when track 4 kicks in, things start cooking. This might not be Southern Rock persé, but I'm convinced a lot of visitors to this site will be extremely happy with this post. Oh, and drummer Barry "BB Queen" Borden went on to play with bands like Molly Hatchet and The Outlaws. So what do you reckon? Is it justified?
Posted by Skydogg at 8/23/2008 03:38:00 PM 2 comments: 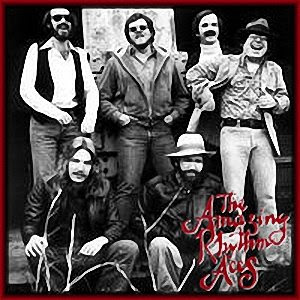 If you're expecting another full album, I'm sorry. One track is all you get here. Everything by Amazing Rhythm Aces has been released on CD and can be purchased easily. This song however has not yet seen the digital light of day.
Originally released in 1975, this was the b-side to 'Third Rate Romance'. The song 'Mystery Train' was written by Herman Parker and Sam Phillips (of Sun Records) and it's a nice addition to their 'Stacked Deck' album. Why it was never added as a bonus track to the CD release is beyond me. But here you have it.
Posted by Skydogg at 8/23/2008 03:27:00 PM 2 comments:

Stargunn - Making Up For Lost Tracks With Ammunition (2003) 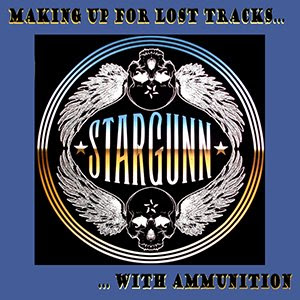 Before Shooter Jennings became the Southern Rock Outlaw he is today, he was walking up quite a different road. Stargunn, the first band he recorded with, was a far stretch from what we know and love him for now. At times it's like a punk alternative to the whole Southern Rock genre. Then again, we all need a kick in the rear sometimes. Wake us up a bit, not allowing ourselves to be too pleased with what we came up some 40 years ago. Keep the music alive, really.
This album, 'Making Up For Lost Tracks With Ammunition', consists of demos, outtakes and the unreleased EP 'Ammunition'. Hence the title.
Be forewarned that this is quite a different take on Southern Rock than you're used from me. But it's all good fun just the same. Also included here is the Stargunn version of 'I've Always Been Crazy', recorded for the Waylon Tribute of the same name. Wake up, y'all..
Posted by Skydogg at 8/17/2008 04:14:00 PM 2 comments: 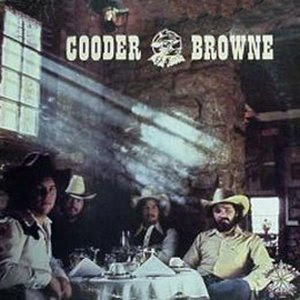 Cooder Browne was a Southern Rock band that released one (their only) album on the Lone Star label (which was Willie's label). It's very country and Texan! If you're into the MTB and Outlaws, but also dig Texas country and even some TexMex (Jalapeno Lady), you'll love this. It has some great fiddling too. It was recorded at Capricorn Studios and produced by Paul Hornsby. Guest appearances by Toy Caldwell (steel guitar) and Jimmy Nalls (of Sea Level).
Another McCluth LP-rip, first brought to you on Skydog's Elysium. Hee-haw!
Posted by Skydogg at 8/12/2008 10:44:00 PM 7 comments: 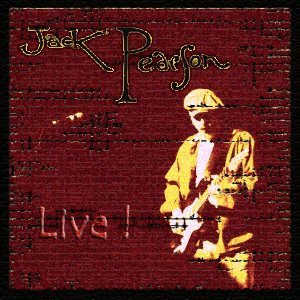 Jack Pearson is a really great sounding guitarist. Though this is mostly a blues affair (and I'm not much of a blues fan myself), I find plenty good reasons to include this recording on Skydog's Elysium. Jack has played on records by Gregg Allman and Jimmy Hall (Wet Willie), and has toured with The Allman Brothers Band (replacing Warren Haynes before Derek Trucks filled the spot). And when I hear Jack play, I don't mind the blues at all! Very melodic, tasteful playing and blues with a funky twist. I highly recommend his 'Step Out!' album to any serious Southern Rock fan. A very soulful, well-played piece of work. But if you need to convince yourself first, check out this 1997 radio broadcast of Jack Pearson & The Nationals. Live!
Posted by Skydogg at 8/10/2008 09:53:00 PM 1 comment: 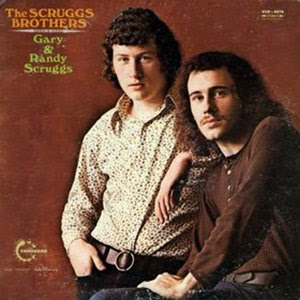 I got the idea of ripping this album when I read the review of Charlie Daniels' duets album 'Deuces'. He does a track with The Scruggs Brothers, which are Gary & Randy Scruggs. Gary and Randy of course being sons of the legendary bluegrass banjo picking Earl Scruggs. Earl Scruggs and his sons made some very interesting albums for Southern Rock fans throughout the 70's as The Earl Scruggs Revue (they had the greatest guests on their albums, ranging from Waylon to Amazing Rhythm Aces).
Before The Earl Scruggs Review however, Gary & Randy Scruggs made two album for Vanguard, the first being produced by Charlie Daniels (released on CD with bonus tracks). The second album, this one, features 'Little Maggie', which Charlie does with The Scruggs Brothers on his duets album 'Deuces'. How about that?
So what about the music, you ask? Well, it's not Lynyrd Skynyrd or The Allman Brothers Band. But it's rock, it's Southern and it has nice songs. Obviously there are bluegrass influences, but that is a welcome addition to this great album. Grab this, you'll be glad you did.
Posted by Skydogg at 8/10/2008 09:41:00 PM 14 comments:

Email ThisBlogThis!Share to TwitterShare to FacebookShare to Pinterest
Labels: Gary And Randy Scruggs

Grinderswitch - Have Band Will Travel (1981) 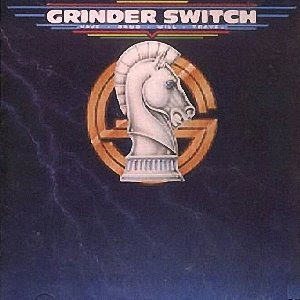 I always thought Grinderswitch was a bit of a strange band. Maybe it's because I'm used to Skynyrd, Blackfoot and The Allmans. But Grinderswitch has many songs on which they come on very strong, like something wild's going to happen, but then it just falls flat on its face. But not really. Cause it's really good. Just not what you'd expect a Southern Rock band to be doing. I don't know. Maybe it's the plodding country bass. It just gets comfortable, never raunchy. It's by no means anything like Black Oak. But if you don't mind that, try this...
This album is quite an obscurity. I see everything else circulating, but not this one. And what reviews I have read of it, it's all pretty bad. But I do not agree. I think it's one of their most enjoyable albums.
I did not rip this one myself. It had some serious flaws. I tried my best to make it better. I think I did. And I really do like the songs. So if you're bound and determined, here's some golden minutes...
Posted by Skydogg at 8/08/2008 12:34:00 AM 6 comments:

Email ThisBlogThis!Share to TwitterShare to FacebookShare to Pinterest
Labels: Grinderswitch 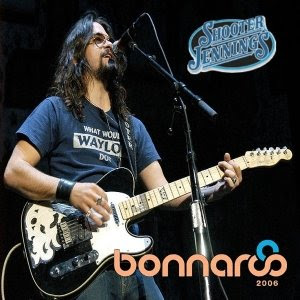 Shooter Jennings is Waylon's son. Like you didn't know. So, do you wonder whether he's got it in him too? Can he follow in the footsteps of his father. You bet yer sweet poopah he can. Not only is he a worthy heir to his father, he's also the (only) one doing justice to the legacy of Ronnie Van Zant. He's doing what Skynyrd so desperately need to be doing. But they're not. And Shooter does.
Shooter's released three studio albums as a solo artist. Before that he was in a band called Stargunn (which I recently found as well). But his solo albums are great Southern Rock affairs, obviously mixed with a heavy dose of outlaw country. But a hell of a lot more sincere than e.g. Travis Tritt.
Shooter's the real deal. I saw him play a while back and I was really impressed by the genuineness of the man, his band and the music. So give it a shot. Here's Shooter.

Just to whet your appetite (in case you still have doubts?), here's a video from Shooter's first album. If you like it, I suggest you go buy all his albums. You won't be disappointed. 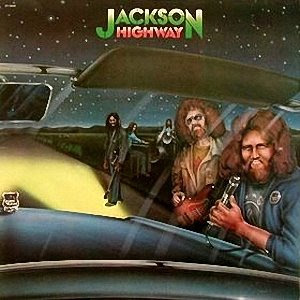 Well, my buddy Mawos' gone and done it again. I've been looking for this album for some 20 years now. So was Mawos, but he's found it, sent it to me and I did the editing. And it turned out real well!
Jackson Highway were named by Jimmy Johnson (Muscle Shoals Sound Studios rhythm guitarist) after the address of the famed Sheffield, Alabama studios. Originally from Dayton, here these guys cut this classic Southern Rock album. And these guys are rocking out alright. It's all good here: the songs, the playing and the singing.
My attention got drawn to this album when I read Rick Medlocke and Greg Walker of Blackfoot played along. Tell you the truth, I don't hear it. Then again, mr. Medlocke is playing some drums here, so... But nothing's lost, like I said, it's all good! The band got additional help, obviously, from some Muscle Shoals pickers. So you're right when you expect some tasty playing. Rave on!
Posted by Skydogg at 8/03/2008 09:48:00 PM 8 comments:

Email ThisBlogThis!Share to TwitterShare to FacebookShare to Pinterest
Labels: Jackson Highway
Newer Posts Older Posts Home
Subscribe to: Posts (Atom)
The music posted on Skydog's Elysium is either out of print or very hard to obtain. You are encouraged to buy anything you like, if available at all. If you are the owner of music posted here and want it removed, send a message and I will comply.