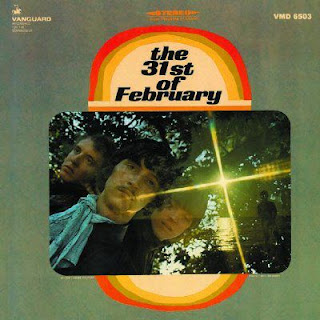 Some origins of Southern Rock for you in this post. The 31st Of February (formerly Bitter Independents) is a 1968 effort by 3 guys from Jacksonville, FL., who went on to much more successful bands. Scott Boyer and David Brown to Cowboy and Butch Trucks to the Allman Brothers Band. In fact, following this album and after Hour Glass broke up (which followed Allman Joys), Duane and Gregg were in the studio with 31st of February members - so one half of the original ABB was in place a year before they formed. This is the folk rock branch of Southern Rock, with a taste of psychedelic pop. Butch includes some percussion instruments normally heard in a college recital. "Morning Dew" from the second 31st of February album, appears on CD 1 of Dreams, the 1989 ABB box set. Given the time frame, this album is a solid offering with a quality sound. Keyboards add variety to the standard trio of electric guitar, drums and bass. Give it a listen to hear the early days of players who established themselves in the near future. Starting down the path!
Posted by Vergergc at 7/19/2013 06:15:00 PM 5 comments:

Email ThisBlogThis!Share to TwitterShare to FacebookShare to Pinterest
Labels: 31st Of February, Cowboy, The Allman Brothers Band
Newer Posts Older Posts Home
Subscribe to: Posts (Atom)
The music posted on Skydog's Elysium is either out of print or very hard to obtain. You are encouraged to buy anything you like, if available at all. If you are the owner of music posted here and want it removed, send a message and I will comply.