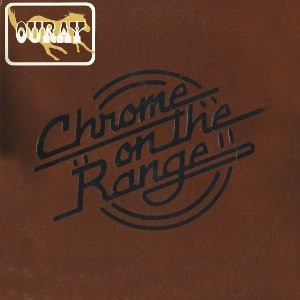 With thanks to Luc and Jacques (my French Connection), I present you Ouray. Musically this reminded me at times of The Marshall Tucker Band and The Outlaws, though Ouray is not a copy of those bands. The band members are: Frank Pirrucello (vocals, guitar, piano), Bo Pirrucello (vocals, pedal and Leslie steel guitars, guitar), Tom Peters (vocals, bass), Hap Harriman (vocals, lead guitar) and Ted Rawlings (vocals, drums, percussion). The album was released on Taxi Records and produced by Ouray and Eddie Cherney. Other than this, I know nothing of this band, nor could I find anything on the web. I figure they might be from Colorado...
The production, I thought, is a little tinny, but the music well pleased me. As in, if you love Southern Rock, you won't go wrong here. I'll be posting their second album, "Motor Dream" from 1981, next month. If anyone knows a little more about this band, please fill me in. Chrome on the range?
Posted by Skydogg at 5/30/2009 07:24:00 PM 19 comments:

Email ThisBlogThis!Share to TwitterShare to FacebookShare to Pinterest
Labels: Ouray

I remember being blown away by this cover of Stevie Wonder's "I Wish" by Coven/Pitrelli/Reilly featuring Zakk Wylde. Zakk's perfomance turned this Funk classic into a Southern Rock classic. Just the way I like it. I hope you enjoy the video as much as I do. The album this is on, is no longer in print. Not a Southern Rock album either. But this track rocks! And you can get that one here..
Posted by Skydogg at 5/19/2009 05:40:00 PM 4 comments: 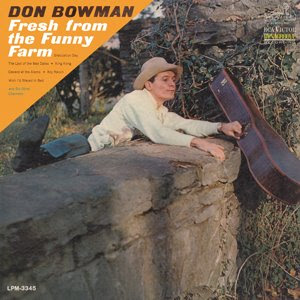 In case you were wondering, yes, I'm gonna post all Don Bowman albums. A little smile occasionally won't hurt nobody. And a good friend of mine really wants this bad. So.
"Fresh From The Funny Farm" is Don's second album. No Rock here, just Country Comedy. And when Don gets plastered, he's the funniest. I don't know very much about Don. I guess he's had two careers, one as a Country Comedian, the other as DJ. You can read about Don here.
Don about his frequent visits at the farm: "Getting in was not the problem..."
Posted by Skydogg at 5/18/2009 07:16:00 PM 7 comments: 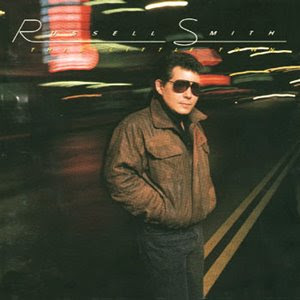 I find myself short on time these days, with hardly any of it left to run this here little blog. So, I'll get you a quickie. Also discontinued by the manufacturer, it's Russell Smith's third solo album. "This Little Town" was released in 1989. A time when music was not healthy. This album sounds very 80's and looks to be aimed at Nashville at that time, when Country hardly had any Country left in it. But Russell Smith is still one hell of a singer and a great tunesmith. So, I hope I didn't scare you too much, cause this is still a very fine album. Nothing too adventurous, comfortably slick but again with superior songwriting. And your mother-in-law will like it too. Russel at his Sunday Best.
Posted by Skydogg at 5/12/2009 06:38:00 PM 2 comments: 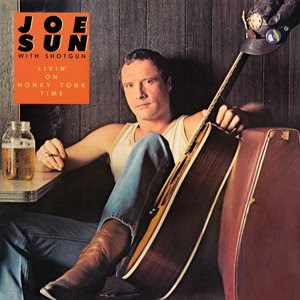 Joe Sun has made quite a few albums throughout the years, most of them very good. But he's not had the kind of success he should have, based on the quality of his work. The music is pretty much in league with the stalwarts of Outlaw Country music. And if, like me, you love Waylon Jennings and you already have everything released by Shooter Jennings, then this is where you should be. Also, for those of you that don't mind Country in Southern Rock and you don't mind taking it easy now and again, this is your chance to learn that not all Country music is shallow, slick and formulated. Joe's got a terrific voice, created some very tasteful albums, he rocks some and he just should be heard. So there!
Posted by Skydogg at 5/08/2009 06:38:00 PM 6 comments:

Tim Brooks & The Alien Sharecroppers - Live At The Douglas Theatre (2002) 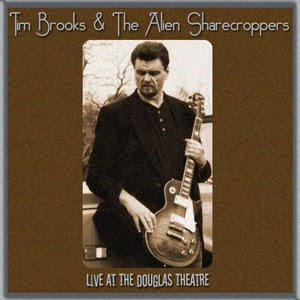 Thanks to Traink, I offer you this little show by Tim Brooks & The Alien Sharecroppers. Important to note is that this was originally offered as a lossless show. Therefore I urge you not to convert this to wav or flac and trade as lossless. If you need that, just holler!
Back to the music. Tim Brooks is amazing and a bit of an anachronism. He sounds so much like heyday 70's Southern Rock, it's like a time warp. It's classic, old school Southern Rock. His style was already very reminiscent to The Allman Brothers Band, on this show even more so. But maybe that has something to do with the fact that it's an Allman Brothers set he's playing. And it's not a dodgy stab at giving it a go. No, this is the real thing. It's raw, has gravelly vocals, great playing and touches the true spirit of Southern Rock. Hell yeah! (got me carried away...)
Apparently, Tim Brooks is out there playing again. He operates from around Macon, Georgia. Check Tim's MySpace page and say hi. Here's hopin' for a new studio album. If this is the first music of Tim Brooks you're about to grab, maybe you should try the studio album by The Brothers Brooks. That's the best way to get acquainted with the excellent music he's made. If, however, you're already familiar with the man, or an Allman Brothers fan, get this now.
Posted by Skydogg at 5/07/2009 09:55:00 PM 3 comments: 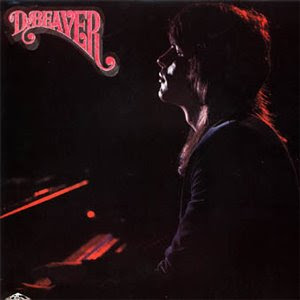 A bit of an oddity, this time. D. Beaver & Combinations was a band (not a D. Beaver solo project) which had emerged from Progressive Rock outfit Edgewood. The band was from Memphis and feature a very young Jimi Jamison (later of Target, Cobra and Survivor) on vocals (not on all tracks, though). Hence the inclusion of this album on my blog: they're from Memphis and feature Jimi Jamison. Though musically this is a whole other ball game.
I have known about this album for ages and was curious because of Jimi's contribution. Thanks to Mr. Tyrone Tieclip (he found it on a blog somewhere, years ago) I now get the chance.
There was some editing to be done on this LP rip. I don't know who ripped it (thank you anyway!), but the songs were badly cut. The music is Progressive Rock, so there were several songs which were supposed to be joined, but which were cut in the wrong places and had gaps in between. I fixed that. It now plays as a gapless album on my iPod.
The music I like a lot. I love Progressive Rock, but I'm not an expert on the subject. So I can't tell you who it resembles. As far as Jimi's vocals go, they're slightly buried in the mix. It's ok, but it's not Target. Still, it's fun to hear him on this record, sounding as young as he does. I would love to have a remastered CD version of this. As for now...
Posted by Skydogg at 5/04/2009 03:24:00 PM 2 comments:

Email ThisBlogThis!Share to TwitterShare to FacebookShare to Pinterest
Labels: D. Beaver And Combinations, Jimi Jamison, Target
Newer Posts Older Posts Home
Subscribe to: Posts (Atom)
The music posted on Skydog's Elysium is either out of print or very hard to obtain. You are encouraged to buy anything you like, if available at all. If you are the owner of music posted here and want it removed, send a message and I will comply.