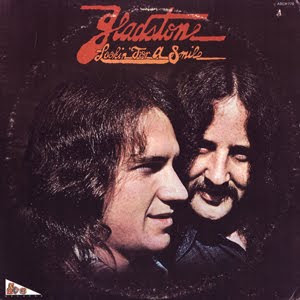 "Lookin' For A Smile" is the second and last LP by Texas band Gladstone. Musically very similar to their debut album "...From Down Home in Tyler, Texas USA", this is yet another quality Southern Country Rock affair. Again, this is not the rip that's already circulating and I have no idea how it compares. I just started from scratch with the raw vinyl rips sent to me by Luc (thanks again, mon ami). I really love this music, it's genteel and well performed. It doesn't rock an awful lot, this is more suited for playing on a sunny afternoon. With a nice glass of wine in hand. Getting it on with your baby. Maybe. If you liked the first, you'll be plenty satisfied with this one. Nuff said. Love, love, love...
Posted by Skydogg at 2/28/2010 12:18:00 AM 2 comments:

Email ThisBlogThis!Share to TwitterShare to FacebookShare to Pinterest
Labels: Gladstone 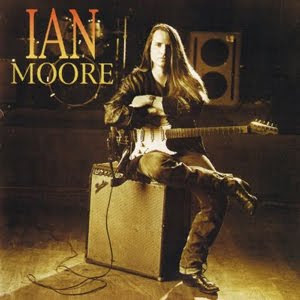 Ian Moore drew my attention at the time because he was signed to the revived Capricorn label. Since Capricorn Records was, at one time, major provider of Southern Rock, I was sure to keep a close eye on any new Capricorn release. Whereas a lot of those new acts weren't exactly Southern Rock, I thought Ian Moore came pretty close. Ian was an Austin, Texas axe slinger, compared a lot to Stevie Ray Vaughn. Blasphemous or no, I never cared much for the albums made by Stevie Ray. And I don't think the comparison holds very well. Ian's music is much less bluesy, much more rocking and much more song oriented. The guy sure can play, and sings quite attractively as well. Sturdy, bluesy Southern Rock, slightly out of left field. He made two more records for Capricorn and then Capricorn collapsed yet again. Ian has been making music ever since, though he changed his style profoundly. Of course that is from what I've read about it, since I have yet to hear any of the albums after his third, "Modernday Folklore". But be sure to check this out if you haven't heard of Ian Moore. You'll be glad you did. Not In Vain...
Posted by Skydogg at 2/24/2010 02:53:00 PM 8 comments: 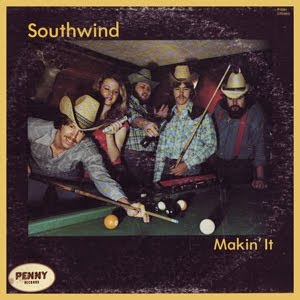 Well, here's obscurity for ya. I don't know anything about Southwind, other than what's mentioned on the back sleeve of the album. From what I gather, this might have been a local band doing rather well on the local juke joint scene and releasing an independent album along the way. Probably for doing some promotion, since it consists mostly of cover tunes. Ranging from pure Country to Southern Rock covers ("Back Up Against The Wall" and "Gimme Three Steps"). The band features both male and female vocals. One track stands out in my opinion, the song "Makin' It", which is one of only two originals. I tried to find some additional information on the internet, but haven't found anything. Pickers and singers are: Martin Childers Evans: guitar and vocals; Bobby Gunter: drums, vocals and fiddle; Greg Evans: bass and vocals; Carol Ann Etheridge: keyboards; Barry Evans: guitar, banjo and vocals. The record was released on Penny Records. Nothing spectacular, just nice. Louisiana Saturday Night..
Posted by Skydogg at 2/23/2010 03:46:00 PM 5 comments:

Email ThisBlogThis!Share to TwitterShare to FacebookShare to Pinterest
Labels: Southwind 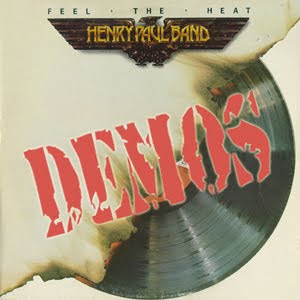 Yeah, some demos for you. I love demos, wish I had many more to offer. So, there's my request to you. But here we have some demos the Henry Paul Band cut in preparation of their second release, "Feel The Heat". They're actually two sets of demos, one recorded on January 31: 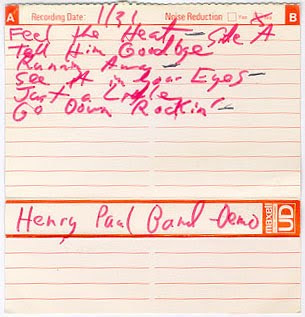 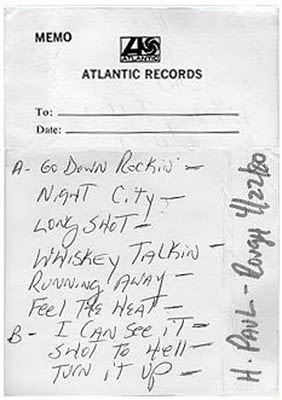 It's a great listen, giving some interesting insight on the making of yet another classic Southern Rock record. And it features "Tell Him Goodbye" and "Just A Little", the first an unreleased new song (I think) and the second a cover of the Beau Brummels hit record from 1965. Sweet! There's also an instrumental version of "Turn It Up", which you can use for your next karaoke party. Hey, for all you Henry Paul and The Outlaws fans: Feel The Heat.
Posted by Skydogg at 2/19/2010 04:14:00 PM 5 comments: 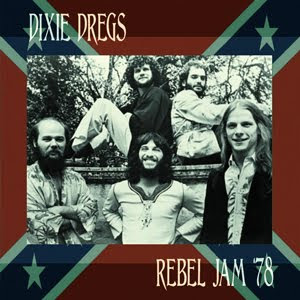 The Dixie Dregs, featuring guitar virtuoso Steve Morse, were rather unusual Southern Rock fare. I guess they could best be described as a Southern Fusion Jazz Country Rock band. And most of their albums were instrumental. This one's for music lovers. It's great music, though probably not as easy to digest for all. In 1978 Dixie Dregs played at the Rebel Jam, a festival of which several tracks had already been released on albums such as "Hotels, Motels & Road Shows" and "Alive Down South". This is the complete part of the festival as performed by the Dixie Dregs. There's some serious picking going and it's one hell of a show to have. Great sound quality too. Refried Funky Chicken!
Posted by Skydogg at 2/18/2010 03:16:00 PM 5 comments: 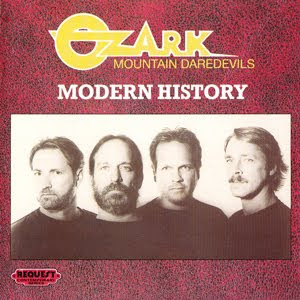 The Ozark Mountain Daredevils' "Modern Day" from 1989 consists mostly of songs previously released on "Heart Of The Country" from 1987. It misses "Give 'Em My Number" and "Fishin' In The Dark". Instead here we get "Love Is Calling", "True Love" and "Over Again". 11 songs instead of 10, two missing and three added. The three new songs are all very similar in style to the rest of "Heart Of The Country", so now you can combine both. Source here, however, is a CD. So no crackle here. Added bonus. All rather slick Country Rock, but well performed. No match to the older albums, still very enjoyable though. And a nice version of Russell Smith's "Lonely Knight". But I do wish they would heatin' up...
Posted by Skydogg at 2/14/2010 04:28:00 PM 1 comment: 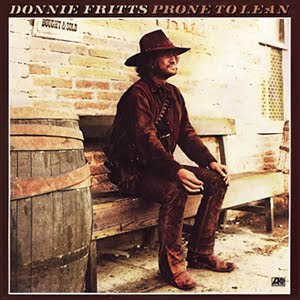 "Prone To Lean" is Donnie Fritts' first solo album. Though he is not that well know as a performer, plenty people will know songs he's written throughout his career. Many Soul and Country artists have performed Fritts' songs, and he's been linked to the likes of Kris Kristofferson, Dan Penn and Spooner Oldham. Donnie Fritts was also responsible for a great contribution to the Muscle Shoals Sound.
The man himself is not much of a singer, but with songs as good as on this album, I really don't mind too much. This record has a swampy feel to it, and a lot of Funky grooves. My favorite is "Sumpin' Funky Going On", on which he's helped out by Tony Joe White. Very nice, very funny. All was recorded at the Muscle Shoals Sound Studios and with help from all the Swampers, including Eddie Hinton and Pete Carr. I know this album had a Japanese CD release. This is a rip from my vinyl copy (rather worn), but I'd love to have it replaced with a CD rip. Country Soul Rock anyone?
Posted by Skydogg at 2/12/2010 06:36:00 PM 4 comments: 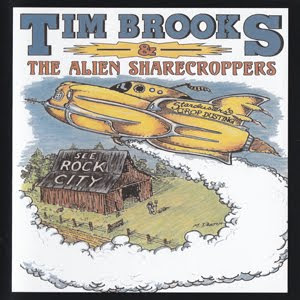 After breaking up the Brothers Brooks, Tim carried on without brother Gregg. The first recorded results can be heard on this 1999 release by Tim Brooks & The Alien Sharecroppers with "See Rock City". What a band name. But what great music yet again. Tim can play Southern Rock music like the 70's never went away. Like the 80's never even existed. Wow!
He's got a good replacement in the vocal department, although I do prefer brother Gregg. The music is great, though the follow-up to this album, "Back In The Game", would be even better, introducing yet another singer. Still, some very strong songs and fierce picking here. A couple of tunes here are re-recorded versions of songs originally included on The Brothers Brooks"" album. I added two bonus tracks, "Sweet Dreams" & "Jesse", which were from a Taxim Records blues compilation called 'Peach State Blues'. That compilation is already out of print and these two tracks are not available elsewhere. So, try shakin' this ol' tree..
Posted by Skydogg at 2/08/2010 09:07:00 PM 1 comment: 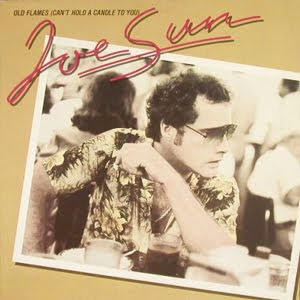 "Old Flames (Can't Hold A Candle To You)" is Joe Sun's debut album from 1978. And you really can't go wrong with any Joe Sun album, so do not hesitate and do grab this. It's some of the finest Outlaw Country you can lay your hands on. Sterling vocals, peachy songs and some fine picking. Of historical interest: mr. Sun does a cool version of "Long Black Veil", which some might know well from Johnny Cash. On this version, it's preceded with a narration by Danny Dill & Marijohn Wilkin. These two wrote the song and have a nice story to tell on how it became the song it turned out to be. Old flames.
Posted by Skydogg at 2/07/2010 01:20:00 PM 8 comments: 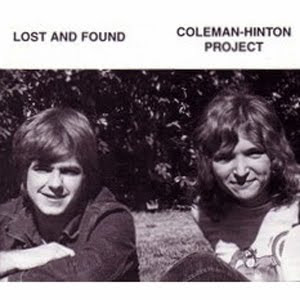 Thanks to my good friend Mawos for tipping me on these recordings. This is a collection of never before released tracks recorded by Jim Coleman together with guitar player extraordinaire, mr. Eddie Hinton. This project started in 1969, and the latest recordings were done in 1971. All these songs were already available for free downloading on mr. Coleman's site, but for your convenience I put them all together, nicely tagged and download-able in one take. Obviously these tracks sound very dated, but they're well worth investigating. Nice atmosphere throughout and thoroughly enjoyable. There's some Country, some Rhythm & Blues, some Beatle-esque Pop songs and some tracks with Eddie singing. I prefer those. Sha Na Boom Boom.
Posted by Skydogg at 2/04/2010 04:30:00 PM 12 comments:

Email ThisBlogThis!Share to TwitterShare to FacebookShare to Pinterest
Labels: Coleman-Hinton Project, Eddie Hinton
Newer Posts Older Posts Home
Subscribe to: Posts (Atom)
The music posted on Skydog's Elysium is either out of print or very hard to obtain. You are encouraged to buy anything you like, if available at all. If you are the owner of music posted here and want it removed, send a message and I will comply.