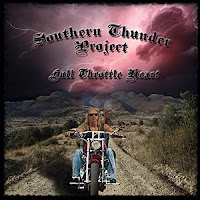 Southern rock is traditionally a matter of bands and, this, maybe even more than elsewhere. By the way, the "Band" term is frequently used in Southern rock group names, and browse the issue #50 of your favorite magazine and you’ll see that all the fifty best releases have been made by bands. But now is appearing an other form of creative organization, still collective, but more punctual and bringing together musicians from different origins. First were Brothers Of The Southland, then Dixie Tabernacle and - to some extent - Dusty King James and now comes the Southern Thunder Project. John Rehmel tells us about this project.

English version of the Bands Of Dixie interview with John Rehmel.

Newer Post Older Post Home
Subscribe to: Post Comments (Atom)
The music posted on Skydog's Elysium is either out of print or very hard to obtain. You are encouraged to buy anything you like, if available at all. If you are the owner of music posted here and want it removed, send a message and I will comply.